So you’ve seen how Floyd Mayweather lives and you want to know if it’s normal.

If most boxers actually make a good living.

Boxing is notorious for having high levels of inequality when it comes to fight purses.

Where the top 1% of boxers collect 95% of all prize money.

So let’s get into it.

The sad truth is that most boxers are broke. Of the total income a boxer makes, an estimated 33.3% of goes to the Manager, 25% goes to the promoter, and 10% goes to the trainer. Leaving less than 32% of earnings for the boxer, before taxes. Unfortunately, boxing isn’t a highly profitable sport for most boxers.

Those are crazy numbers.

Considering only 2% of a promotions purse is allocated to 70% of fighters, the pie is already extremely small.

Splitting the pie with everyone and their mother leaves almost nothing for the person actually risking their life.

Money earned in boxing is taxed the same way as a normal office job, with the same individual tax bracket considerations. Most boxers will be taxed around 40% of their earnings after deductions. So boxers who win a $10,000 purse, after paying trainers, managers, and taxes will be left with only $6,000 to take home.

Remember, any payments made to staff on your team is considered tax-deductible.

Meaning you can deduct what you owe your trainer and manager before you calculate how much tax you must pay on what’s left.

You only pay tax on what’s left after all your business costs are paid.

That’s only 34% of the total prize money for your fight.

How Much Do Amateur Boxers Make Per Fight?

Amateur boxers by law aren’t allowed to earn any money for competing or coaching unless it’s for expenses. Neither are you allowed to receive money or products for endorsements. The only way to earn money boxing as an amateur is to join the World Series of Boxing where you can earn between $25,000 – $300,000 per year.

The World Series of Boxing was created by the International Amateur Boxing Association in July of 2010.

Joining the World Series is a privilege only offered to boxers with the potential of heading to the Olympics.

How Much Money Does The Average Pro Boxer Make?

On average, boxers earn about $2,225 per fight early in their careers. More experienced professionals earn about $6,875 on an average per fight, before expenses and taxes. Most fighters only have about 4 to 5 fights per year, making them on average about $30,000 – $38,000 annually, excluding sponsors and endorsements.

Some fighters earn a lot more than this, like Floyd Mayweather for example.

What you make as a professional depends on your boxing record, how entertaining you are, and a few other important factors I’ll be going over in a bit.

As I mentioned before, how long you’ve been competing plays a big part in your earnings:

Remember, the numbers above are before travel, management fees, training costs, and taxes.

Don’t despair, there are ways to earn more in boxing and I’ll go over those in a bit.

ALSO READ: [EXPLAINED] How To Clean And Maintain Hand Wraps

How Much Does A Pro Boxer Make On His Debut?

Most pro boxers earn between $500 – $4,000 in their debut fight, before deductions. How much you make depends on the reputation you develop coming up as an amateur. If you’re popular and attract bigger audiences, you could earn as much as $150,000 or more in your debut like Oscar De La Hoya did in 1992.

De La Hoya grew his popularity as an amateur by being extremely dominant.

Winning the U.S. National Championship, being the youngest to win the gold at the Goodwill Games, and winning the 1992 Summer Olympics in Spain.

Developing a reputation as an amateur is the best way to get the attention of boxing promoters and sponsors who’ll pay more for you more to compete.

How Much Do PPV Boxers Make?

Pro boxers who manage to get onto a PPV event earn between $10,000 – $35 million per fight. The more popular you are, the more PPVs you sell, the more promoters are willing to pay you to fight. There’s a high level of inequality in boxer earnings, where the main event can earn up to 95% of the entire purse.

On the same card where Canelo Alvarez earned $35 million for his fight with Daniel Jacobs, fighters at the bottom of the card like Bilal Akkawy only earned $30,000.

Likewise, when Vasiliy Lomachenko fought Anthony Crolla for his purse of $1.2 Million, Alfredo Blanco who was on the prelims only earned $10,000.

Who Is The Highest Paid Boxer?

The highest-paid boxer in the world at the moment is Floyd Mayweather, earning as much as $280 million for a single fight with Conor McGregor. Earning more than $100 million for each of his 3 biggest paydays, bringing him to a total net worth of around $560 Million in 2021.

Remember, Floyd Mayweather is an exception.

Most boxers earn around $50,000 per fight at the peak of their careers.

Why Are Some Boxers Paid So Much?

Like it or not, boxing is a spectator sport.

It lives and dies by the people who pay to watch the fights.

5 main reasons some boxers are paid more than others:

It’s important to think outside of the box when looking to earn more in boxing.

Do Boxers Get Paid If They Lose?

Knowing they’re at least financially stable no matter the outcome.

Who Gets Paid More UFC or Boxing?

Boxing champions can receive as much as 10x more than UFC champions. Boxing has been around much longer than MMA, developing into an industry that can pay its champions multi-million-dollar purses for a single fight. Currently, UFC only pays their champions a few hundred thousand dollars per fight.

Making boxing a better career choice than MMA, at least for now.

Is Boxing A Good Career Choice?

This is a tricky question.

Boxing can be a very good career choice:

However, most boxers won’t make it to this point.

For every champion in the world, there are 100 forgotten losers that never make a lot of money and end up with permanent head injuries like CTE (Chronic Traumatic Encephalopathy).

Many boxers don’t think of boxing as a job, but rather a calling.

Knowing the risks involved and the chances of big success are slim, but doing it anyway.

ALSO READ: [EXPLAINED] Boxing Vs Muay Thai | Which Is Better? 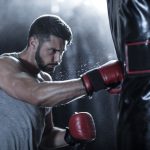