People with larger frames tend to excel in many different sports.

However, there are surprisingly few bigger guys and girls who participate in martial arts.

This is strange as there are plenty of martial arts well-suited for larger people.

Even those looking to have some fun and learn self-defense while losing some weight.

In this post, we’ll be looking at the five best martial arts for big guys.

The five best martial arts for big guys are:

Learning martial arts provides so many benefits, even as a larger person.

If you’re a big guy and you’re on the fence about learning a martial art, let’s look a why you should consider doing it.

Here’s the thing though, I can’t tell you how many “big guys” I’ve beaten in training.

Not because I’m particularly strong, I mean I’m only 5’2″ tall.

It’s because they rely too much on their size, and unfortunately, that can only get you so far.

Here are my top 5 reasons you should consider learning a martial art:

Let’s take a closer look at each of these martial arts to make your decision easier.

The sport of boxing needs no introduction.

It’s practiced across the world and is popular with individuals of different sizes and shapes.

Boxers learn to beat their opponents using a series of strikes and jabs with their fists while repositioning themselves with their feet.

Boxing can offer a high-intensity workout, which makes it great for people who’d like to get in shape quickly while also learning to defend themselves.

Why Boxing Is Great For Big Guys

If you’re reluctant to get into martial arts out of fear of harming someone smaller than you, boxing can be a great choice.

This means you’ll likely train or fight with people who are in the same weight category as you.

Big guys also tend to have longer arms, and therefore a longer reach.

This can be useful in street fight settings where you need to land blows without getting hit yourself.

Judo is a popular martial art that originated in Japan.

This martial sport gained widespread recognition after becoming a popular part of the Olympics.

Since then, Judo has spread across the world as is even included in the curriculums of some schools, like wrestling in the United States.

Judo covers many types of training.

Such teachings improve discipline for both the body and the spirit.

Why Judo Is Great For Big Guys

Judo is a great fit for big guys because it focuses on grapples, throws, and hooking your opponent.

These techniques are useful for smaller framed individuals.

However, they are especially well-suited for people with muscle mass or high body mass.

Having a large frame makes it difficult for your opponents to grapple you.

Your weight will also discourage them from attempting throws that would normally take down smaller opponents.

Your size could be your greatest asset as a Judo fighter.

So consider learning this martial art if you want to take full advantage of your size.

The art of wrestling is practiced in many cultures around the world and has been for thousands of years.

Wrestling is so important in fighting that all MMA fighters now include it in their training.

The main principle of wrestling is to grab hold of your opponent, take them to the ground, and hold them there against their will.

Wrestlers use a combination of lifts, twists, tackles, throws, and trips to bring down their opponent.

Why Wrestling Is Great For Big Guys

Wrestling is a good choice for bigger guys or those with high body mass because similarly to Judo, your size is a big asset.

Wrestling also features different weight classes, so you won’t have to worry about facing opponents that are significantly smaller than you.

Taekwondo is a Korean martial art that contains elements of many other martial arts such as Taekkyeon, Subak, and Gwonbeop.

It was developed by multiple Korean Kwons and military generals.

Joe Rogan is well known for competing in and coaching Taekwondo in his younger years.

However, larger Taekwondo fighters still have many advantages over other, smaller practitioners.

Why Taekwondo Is Great For Big Guys

Tall people excel at delivering quick and far-reaching strikes due to the length of their limbs.

This length also allows them to generate more force in their strikes compared to people with shorter limbs.

Taekwondo fighters learn many powerful kicking strikes that could be useful for self-defense, especially to keep attackers at a safe distance.

You can roundhouse kick your opponent and take them down before they even have a chance to punch you.

This martial art also helps improve flexibility, so if you’re looking to limber up then Taekwondo is for you.

Brazilian Jiu-Jitsu is a Brazilian variation of Japanese Jiu-Jitsu, and also includes techniques from Judo.

This martial art focuses on beating an opponent by bringing them to the ground, controlling, and submitting them.

BJJ fighters use grapples, chokeholds, and joint locks to control and disable their opponents.

This makes it a powerful martial art for self-defense purposes.

Like wrestling, Jiu-Jitsu is widely adopted by MMA fighters because it’s as vital to fighting as striking in the stand-up position.

Why Brazilian Jiu Jitsu Is Great For Big Guys?

Brazilian Jiu-Jitsu is great for big guys much in the same way that Judo is.

People with large frames and body mass are difficult to take down or control using grapples and holds.

They can use their mass for added leverage, to take down their opponents, and apply submission holds with ease.

Being a bigger guy in Jiu-Jitsu is a huge advantage, provided you learn the necessary techniques to use your size to your advantage.

Brazilian Jiu-Jitsu training is also cardio-intensive, making it a great way for overweight people to shed a load of pounds.

Boxing, Taekwondo, and Judo are great for taller guys who have the added advantage of longer arms and legs.

Where wrestling and BJJ are great for the bigger guys who want to use their physicaly size and weight to their advantage.

As you can see, there are a number of martial arts that are well-suited for big guys.

Far more than I can list here, but these are my top 5 martial arts for bigger guys. 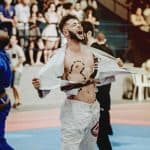