Many people assume that martial arts are only suited for healthy and capable people.

This often discourages overweight people or those with chronic conditions from ever practicing martial arts.

However, the truth is most martial arts can be adapted to fit people with limited physical capabilities, like bad knees.

If you suffer from bad knees, you’ll be glad to learn there are plenty of great martial arts you can still try.

In this post, we’ll look at the 4 best martial arts for bad knees and what you can do to avoid making your knee problems any worse while practicing.

The three best martial arts for bad knees are:

Once again, most martial arts can be adapted to limited capabilities.

However, these martial arts require very little adaptation because of their more static styles.

So you can practice them as they were intended to be practiced, without needing to compromise on the art.

Before we look at each of these martial arts in more detail, it’s worth examining why many people with bad knees avoid getting into martial arts.

Why Do People With Bad Knees Avoid Martial Arts?

Our knees serve as crucial joints that facilitate leg movement.

Developing a knee injury or a knee condition can be debilitating for many, as it can make the act of walking, running, or even standing up incredibly difficult.

People who suffer knee injuries at a young age often deal with pain and swelling for a long time.

These problems are often worsened by physical activity as it places stress on an already-compromised joint.

Therefore, any martial art for people with bad knees should place minimal stress on this joint.

This is because Tai Chi exercises both the body and the mind.

Tai Chi aims to integrate the mind and body by slowly controlling movements, rather than employing fast techniques.

It places a heavy emphasis on breathing and cultivating internal energy.

Why Tai Chi Is Good For Bad Knees

Tai Chi is often associated with seniors because of its popularity with this age group.

Many doctors recommend this martial art for people with bad knees because it’s a low-impact activity that still provides a fairly decent workout.

That being said, there are many Tai Chi moves that require you to keep your knees bent in position.

People with bad knees should avoid such moves and instead follow a modified version of Tai Chi that focuses on other core techniques such as Beginner Posture, Raising Power, and Single Whip.

Kenpo Karate is a relatively new martial art based on traditional Karate from East Asia.

While traditional Karate is performed in Dojos, Kenpo Karate was designed to be performed for street fighting.

Kenpo Karate fighters are able to keep their opponents occupied with a series of attacks, thereby preventing them from retaliating effectively.

Why Kenpo Karate Is Suited For Bad Knees

Kenpo Karate does utilize the knee for certain types of strikes.

However, most of its moves don’t require direct use of the knee.

Instead, much of this martial art focuses on elbow strikes, finger strikes, open-hand strikes, and punches.

Some forms of Kenpo Karate also use weapons such as clubs and knives.

Practicing a modified version of Kenpo Karate with fewer knee-centric moves can be advantageous for many reasons as it helps you maintain flexibility in other parts of your body.

Kenpo Karate is also great for self-defense in street fights.

If you want to lose a few pounds while protecting your knees, Kenpo Karate can be a good choice for you.

Kyudo may be less popular than the other martial arts on our list, however, it’s great for anyone seeking a low-intensity activity.

Kyudo is used for many different purposes including military activity, but it’s also used for ceremonies and contemplative practice.

Like Tai Chi, Kyudo is very meditative in nature.

Why Kyudo Is Suited For Bad Knees

Kyudo practitioners typically wield their bow and fire arrows from a standing position.

This places stress on your arms and chest, while your knees simply need to keep your body balanced.

This makes Kyudo a great activity for people with bad knees.

It’s especially well-suited for individuals who would like to engage in an outdoor activity with a competitive aspect.

Aikido is another great martial art for people with bad knees.

It focuses on flow and using your opponent’s weight and momentum against them.

The founder, Morihei Ueshiba’s philosophy of Aikido is to overcome oneself instead of cultivating violence or aggressiveness.

Why Aikido Is Good For Bad Knees

Aikido has almost no forceful moves that might further damage or hurt your knees.

There are some movements that require bending your knees, but these techniques can be modified to avoid worsening your knee injuries.

Aikido utilizes very little or almost no kicking, one of the main reasons this martial art is one of the best for bad knees.

Like Tai Chi, Aikido is also popular among older practitioners wanting to train into their later years.

Is Boxing Good for People With Bad Knees?

One might assume that boxing would be a good martial art for people with bad knees.

While traditional boxing does not involve kicks or knee strikes, it still involves your knees to a large degree.

Boxers must stay on their toes constantly and reposition themselves to avoid jabs from their opponents.

This often involves sudden movements and turns that place a fair amount of stress on the knees.

If you’d like to start boxing with bad knees, it’s important to modify these movements to avoid further damaging your knees.

The martial arts mentioned above may place less stress on the knees than other activities.

However, you should still be cautious when engaging in them.

Some tips to avoid making your knee problems worse while practicing martial arts include:

Consider performing some warm-up exercises and stretches before engaging in any martial arts.

This helps your mind and body get ready for the activity and reduces the likelihood of you injuring yourself.

The term “No pain no gain” rings true for many physical activities.

However, pain in the knees could be a sign that you are actually making things worse.

If you feel your current activity is damaging your already-bad knees, consider taking a break for a bit.

You should ensure you practice your chosen martial art regularly, and without taking long gaps.

This keeps your joints supple and flexible, ready to move.

Exerting force on your knees after a long break could cause more damage, so you should remember to keep things consistent.

As with any medical problem, it’s always best to consult your physician beforehand.

If you really want to train martial arts with bad knees, ask your doctor what he or she recommends avoiding.

So you can keep training for longer without risking your knees. 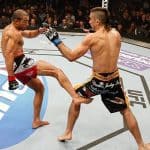 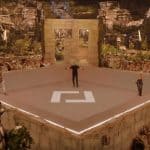