Many seniors engage in physical activity to keep their bodies healthy and functioning well as they age.

However, it is also possible for seniors to stay fit using martial arts.

There are numerous martial arts that are suited or can be adapted for older individuals.

We researched the top ones and compiled the following list of the 7 best martial arts for the elderly.

As someone in your older years, you’ll want to consider martial arts with as little impact as possible.

My 7 best martial arts for the elderly include:

Before we look at each of these in more detail, let’s first discuss the necessary precautions to keep in mind when choosing a martial art in your senior years.

Why Elderly People Should Be Careful With Martial Arts

Before we get to our list of the best martial arts for the elderly, it’s worth discussing why seniors should be careful before enrolling in any martial art.

Many martial arts feature sudden movements and strikes that place stress on the body’s joints.

These forces aren’t usually a problem for young people.

However, your body’s joints become stiffer and less flexible with age.

Seniors who place stress on their joints increase the risk of wearing them out.

This can lead to the development of painful chronic joint problems.

Such problems are especially prevalent in the knees of the elderly.

Seniors who wish to learn a new martial art should ensure it does not put great stress on their knees.

Most martial arts focus on fighting and combat.

Such arts include strikes and other moves that could lead to injuries, even during practice sessions.

Seniors are more likely to suffer a serious injury from a hard fall or from being struck.

Therefore, they should be careful about engaging in any martial art that could lead to such injuries.

Aikido is an ancient martial art that originated in the 14th century in Japan.

It resembles both Judo and Jujitsu in technique.

They learn to do this by using their attacker’s momentum against them.

Aikido fighters are taught to subdue their opponent rather than harm them.

However, they can still be lethal if provoked.

Why Is Aikido Great For The Elderly?

Aikido is great for the elderly because it can be modified to fit their needs.

For example, this martial art includes many different types of throws.

These can be omitted during training so that seniors can focus on other core techniques such as joint locks and pins.

This special form of Aikido is known as “No Fall” Aikido and is taught in many countries.

However, Aikido also trains the mind and spirit, not only the physical aspects.

It helps improve strength and flexibility.

It also promotes better circulation and helps with knee problems.

Physical and mindful activities like Aikido may also help to prevent Alzheimer’s or dementia.

Wing Chun is an ancient martial art that originated in Southern China.

It involves striking as well as controlling your opponent in close-range combat.

Some key Wing Chun moves to include:

Wing Chun is even practiced by some MMA fighters, so it does provide some realistic self-defense.

Why Is Wing Chun Great For The Elderly?

Many people enroll in Wing Chun past the age of 65.

This is because martial art focuses on inner energy in addition to external physical strength.

This helps with strength development without exerting your muscles and joints.

It focuses on posture and precision, not your power.

There are many benefits of Wing Chun like mobility, flexibility, core strength, and stress relief.

It’s based on Qigong techniques from thousands of years ago.

However, many would consider it to be more of a combination of gentle moves than a martial art.

Tai Chi, which is often referred to as “Shadow Boxing”, is non-competitive and offers gentle physical exercise along with active stretching.

Why Is Tai Chi Great For The Elderly?

Tai Chi is one of the most popular martial arts among seniors.

In fact, many doctors recommend Tai Chi for the elderly and those with weak knees.

It puts very little strain on your joints and instead teaches you to focus on each movement as you conduct them.

Tai Chi also offers a number of health benefits such as:

If you want to enroll in a martial art that offers numerous benefits in old age, Tai Chi is definitely the way to go.

Karate is arguably one of the most popular Eastern martial arts practiced today.

It originated in Okinawa, Japan, in the 20th century.

Karate was designed to turn the body into a weapon at a time when weapons were banned in Japan.

Its name translates to “empty hand”.

This martial art has always been defensive in nature.

Karate practitioners are skilled at defending and counter-attacking against their opponent’s strikes.

Why Is Karate Great For The Elderly?

Karate is great for seniors because it allows people to learn at a comfortable pace.

There is never any pressure for the elderly to keep up with learning new techniques.

Karate teaches you a wide range of techniques like punching, kicking, joint locks, sparring, grappling, and much more.

This allows them to practice this martial art safely.

After all, everyone wants a black belt they can show off to their friends.

These are important for people in old age, so consider enrolling in Karate if you want to keep your body and mind healthy.

Kyudo is an old Japanese martial art that focuses on using the bow and arrow.

The word Kyudo means “The Way of the Bow”.

In Japan, the bow was used for hunting, war, court ceremonies, games, and contests of skill.

Kyudo is practiced in different schools and styles.

Thousands of people do Kyudo across the world and the Kyudo federation has over 132 000 graded members.

The traditional teachings of Kyudo are virtue (zen), beauty (bi), and truth (shin).

Why Is Kyudo Great For The Elderly?

Kyudo has many elements to it like attitude, movement, technique, courtesy, compassion, morality, and non-aggression.

It’s a great martial art for older people as it doesn’t put any pressure on weak knees while helping strengthen your arms and posture.

The benefits of Kyudo:

It became a sport in Ancient Greece and even became an Olympian sport.

The sport has many weight categories and is divided into amateur and professional divisions.

Why Is Boxing Great For Elderly?

Boxing can be both competitive and non-competitive, so it is a great way to get fit.

Boxing focuses on punching with your hands, which is beneficial for those who aren’t that flexible in the legs.

The non-competitive side of boxing can be fun, you meet new people and you’re always learning new techniques.

Boxing helps you increase strength, and improve both your mental and physical health.

The boxing stance and punching techniques you’ll learn will strengthen your core muscles, which will help with your overall balance.

Boxing has many health benefits, including cardiovascular and mental health.

Brazilian Jiu-Jitsu, also known as BJJ dates back to the 1920s.

Derived from Japanese Jiu-Jitsu and Kodokan Judo, BJJ was developed into its own martial art by the Gracie family and others.

Over the years, BJJ has developed into a fun sport but was originally developed as an effective self-defense system.

Why Is Brazilian Jiu-Jitsu Great For Elderly?

BJJ is one of the most popular martial arts for seniors due to its aerobic benefits and relatively slow fighting style.

It helps build full-body strength and increases mobility for those who struggle with flexibility.

BJJ has a range of physical and mental benefits like:

There are many more benefits in BJJ that helps your personal wellbeing.

BJJ is not only great for exercise, but it’s also a good way to socialize and to learn new and useful skills.

As you can see, there are plenty of great martial arts for elderly people to practice.

If you’re looking to socialize more, get fit, and have fun – then you consider starting one of these fighting styles.

Also, consider sharing the above list with any seniors who are on the fence about enrolling in martial arts at their current age.

It’s never too late to start learning something new. 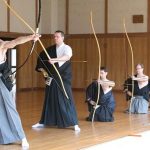