Who Is Fernando Vargas?

Fernando Javier Vargas, aka “El Feroz”, aka “The Aztec Warrior”, aka “Ferocious Fernando” was born in California, United States on December 7th, 1977.

He started boxing at the tender age of 12, eventually becoming the youngest junior middleweight titleholder in history when he was 21 in 1998.

Vargas took part in the 1995 Pan American Games and won a bronze medal before representing the United States at the 1996 Olympic games.

Boasting an outstanding amateur career record of 100 – 5, he went on to a professional boxing career spanning 10 years.

Vargas was going to fight his professional debut in 1996 but broke his hand in training, postponing his first professional bought by 5 months.

Who Vargas dispatched in only 56 seconds.

He went on to win most of his fights by Knockout.

We’ll look at some of his most memorable fights in a bit.

Where Is Fernando Vargas Now?

As of 2021 at the age of 44, Fernando Vargas is still involved with boxing and coaches two of his sons who are currently amateurs. He lives in Las Vegas with his wife and 4 children, and started his own non-profit organization in 2017 called Fernando Vargas Fighting Foundation.

Other activities include athletics and community service.

Fernando wants to ensure children have a good future by developing their discipline and self-esteem.

Why Did Fernando Vargas Retire?

He said he’d accomplished what he wanted in boxing and it was time for him to retire, and to focus on other things in his life.

Vargas was never motivated by the money, stating he only ever boxed for the love of the sport.

What Is Fernando Vargas’ Net Worth?

Fernando “The Aztec Warrior” Vargas has an estimated net worth of around $1 million.

He made most of his money through professional boxing, but has also appeared in TV shows, movies and brand promotions.

His family even had their own reality TV show called Welcome To Los Vargas, in addition to his appearance on Telemundo’s, Top Chef Celebrity.

Vargas was coach by Eduardo Garcia in the La Colonia Gym which he used to walk to every day.

The two met when Fernando was only 16 years old, and Garcia immediately recognised his incredible talent.

Fernando fought 31 fights in his professional career, winning 26 and losing 5.

His 5 losses were to:

Let’s take a look at his most memorable professional fights.

The last fight of Fernando’s career was against Ricardo Mayorga on the 23rd of November, 2007 in Los Angeles, California.

The fight was scheduled for 12 rounds and they fought all the way through.

Mayorga started the first 2 rounds the more confident and stronger fighter, landing most of his heavy strikes.

Vargas was knocked down in the first round but managed to get back to his feet.

Fernando came back in the 3rd round with some of his own heavy shots, landing nearly every right hook to Mayorga’s face.

He dominated the 4th and 5th rounds too.

It was a war in the ring with both boxers giving everything they had.

Mayorga knocked Fernando down again in the 11th round, once again Fernando stood back up.

The fight finished after the 12th round with Mayorga winning by Majority Decision.

Fernando started the bought as the more dominant fighter, keeping Ike on the defensive.

Quartey managed a few heavy punches of his own, but couldn’t hurt Vargas.

It was exciting fight, keeping fans on their feet.

The fight ended after the scheduled 12th round with Vargas winning by Unanimous Decision.

Yori fought back in round two but couldn’t land any significant strikes of his own.

The fight was scheduled for 12 rounds but was stopped in the 7th. 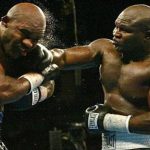