A tournament where all the champions of the planet’s top MMA promotions fight each other once a year to determine the true world champion in each weight division, as well as the the best pound-for-pound fighter on Earth.

The sport of mixed martial arts is run for the most part by ‘promotions’ – independent companies that build rosters of fighters, and then organize and promote fights between these fighters within their own respective rosters.

There are hundreds of MMA promotions from all around the world, with separate rosters, rules and weight classes.

This makes it incredibly difficult to compare and rank the top MMA fighters on the planet.

The sport is dominated by an elite few promotions, most famously the UFC (Ultimate Fighting Championship).

Many of these promotions bestow the title of ‘world champion’ on their winningest fighters.

The UFC is the biggest, wealthiest, most mainstream promotion.

Fighters often only earn contracts with the UFC after competing and being successful in other MMA promotions.

Because of this, a vast majority of MMA fans just accept that the UFC Champion in each weight division is the real ‘world champion’, simply by virtue of them competing in the UFC – the top promotion with the top-ranked talent.

However, as we’ve witnessed with the recent demise of Demetrious “Mighty Mouse” Johnson in his ONE Championship title fight against Adriano Moraes, this isn’t always necessarily the case in reality.

Demetrious Johnson, widely considered to be the greatest flyweight mixed martial artist that ever lived, became one of the most dominant champions in UFC history, breaking loads of records and topping the UFC’s pound-for-pound rankings.

He recently left the UFC and joined Singaporean promotion ONE Championship, working his way up to a title shot against ONE Champion Adriano Moraes – and lost in devastating fashion.

There are many top promotions around the world, with many great champions (check out the list of current MMA champions from the best-ranked promotions here).

Therefore, assuming that the UFC champion in each weight division is the best, is akin to assuming that just because we live on Earth, there is no life on other planets (controversial metaphor, I know).

SO, in order to solve this conundrum …

Imagine a ‘Champions League’ of MMA, modeled after the super successful and world-famous UEFA Champions League, where the champions of each country’s league in Europe are pitted against each other to determine the ultimate continental king.

Every year, for the months of October, November & December, the ‘MMA Champions League’ takes place.

All the champions in each weight division, from the top 8 MMA promotions in the world, face off against each other in a grand-prix style tournament, to determine the UNDISPUTED MMA World Champion.

This is how you could then conclusively determine who the best fighter on the planet is in actuality, in each weight division and in a truly consolidated pound-for-pound ranking system.

Not to mention doing so in an objective, quantifiable way, that would also act as an absolute spectacle for fans – a highlight of the MMA calendar if you will.

According to Reuters, the Professional Fighters League (PFL) announced $65 million in new financing in February 2021 and will invest that capital in expanding an international MMA competition built on soccer’s Champions League model.

While the PFL’s ambition is admirable, they are, in essence, still only one promotion.

This means that even if they succeed in replicating the model and do manage to build a global league, it will still only be a competition between the fighters on their own roster.

Even if the PFL somehow managed to attract and prise away the top fighters from the UFC, there will still always be world-class fighters competing on the books of other promotions.

So even the PFL’s ‘Champions League’ could never categorically claim that their champions are the ‘undisputed’ world champions of MMA.

The only way to replicate the quintessential structure of football’s Champions League format is an inter-promotion tournament.

For that, MMA would need one single, powerful, global sanctioning and regulatory body to organize and administer it. 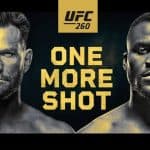